Politics and the Persian Language

By
LEE LAWRENCE
Dec. 6, 2013 7:46 p.m. ET
Whether recounted in sweet-smelling tea shops or presented in illustrated manuscripts, the "Shahnameh" has entertained and inspired Iranians for more than 1,000 years. Of all their artistic treasures, Abu'l Qasim Firdausi's "Book of Kings" is the one Iranians most prize. They may not have its 50,000 verses memorized, but they are all familiar with this blend of myth and history filled with tales of heroes slaying demons, portents so fierce that kings fear "their liver will split in terror," and maidens-oh, what maidens-"as elegant as cypress" and as pure as smokeless candles.
From the start, however, the epic has also repeatedly served as a political tool. When Firdausi was penning his verses in 1007-10, Muslim Arab dynasties had ruled Persia for more than 31/2 centuries. Yet he avoided using Arabic words almost entirely and incorporated no elements of Islamic thought. His motive? To stir national pride and resistance to foreign rule by celebrating Persian culture.
In the short run, Firdausi's gambit failed. For some 200 years the epic lay dormant, gaining traction only after the Mongols invaded in 1219. Scholars posit that courtiers advised the new rulers to win their subjects' hearts by commissioning sumptuous, illustrated copies of the "Book of Kings" or, as it is sometimes translated, the "King of Books." 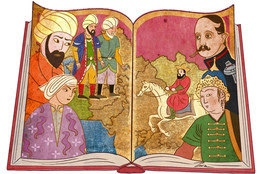 Abu'l Qasim Firdausi's 'Book of Kings' Zina Saunders
Over the coming centuries, rulers gave manuscripts to dazzle, curry favor or, as happened in 1829, avoid war. Two months after the Russian ambassador was murdered in Tehran, the shah sent a lavish gift package to the czar. Its most precious offerings, says Firuza Abdullaeva, head of the Shahnama Centre at Pembroke College, included Arab horses, gold, an 88.8-carat diamond and a 1651 "Shahnameh" with 192 miniatures. The shah hoped his largesse would so appease the czar that Russia would not only refrain from retaliation but forgive some of the indemnity Iran owed as part of a recent treaty. It worked.
More subtly, illustrated manuscripts also offered an opportunity to layer in a subtext through the paintings. Dick Davis, professor emeritus at Ohio State University and author of several translations of the "Shahnameh," notes that the poem sometimes draws on contradictory sources. At first, a royal adviser, Mazdak, is praised for redistributing goods to the poor, like Robin Hood. Later, though, he is described as treasonous. His followers are punished, "planted, head down, with their feet in the air, like trees," and Mazdak himself is "strung up alive and head down. He was killed with a shower of arrows," and the nobility "were once more assured of their wealth.and splendid gardens." (These and all other quotes are from Mr. Davis's engaging 2006 Viking edition of "Shahnameh: The Persian Book of Kings.")
Rarely, Mr. Davis explains in an email exchange, did artists depict Mazdak as the wise counselor, opting instead for his gruesome execution. This, he believes, suggests that "the illustration agenda of the manuscript is going along with the condemnation of Mazdak as seditious and foolish, ignoring the initial characterization." Not surprising that royal patrons would condemn Mazdak's egalitarianism, he adds.
Equally unsurprising, heroes look Asian in Mongol-period manuscripts while in 17th-century Safavid illustrations they sport long mustaches then fashionable among nobles. At one level, this made the scenes more current. At another, says Charles Melville, founding director of the Cambridge Shahnama Project, it allowed rulers to "people the myth," inserting themselves into Persian history, thereby claiming legitimacy.
Some royal patrons, says collector and historian Abolala Soudavar, went further. He argues that in a manuscript commissioned by the last Mongol ruler-dubbed the Great Mongol Shahnameh (c. 1330s)-every illustration does double duty, simultaneously referring to episodes in the epic and in Mongol history. One of Mr. Soudavar's more compelling examples is a painting showing a horse, its body pierced by spears and blades, writhing at the bottom of a pit. To his right, a bleeding man has leapt up and shot an arrow through a tree, killing the man hiding behind it. This is the last scene in the story of Rostam, who has fallen into a trap set by his brother. With a final surge of strength and cunning, the beloved hero kills the traitor.
Elsewhere, Rostam wears a tiger pelt, but here both brothers don Chinese robes. The painting, Mr. Soudavar concludes, is also evoking an incident in which Mongol emperor Kublai Khan took revenge against a treacherous sibling. By fusing both stories, the book becomes a "political manifesto in support of the legitimacy of the Mongols," Mr. Soudavar contends.
Not everyone agrees with this interpretation. Nobody, however, doubts the motives behind a set of 1942 postcards inspired by the "Shahnameh" that Ian Cooke, social-science curator at the British Library, stumbled on in the library's archives. Commissioned by the British Ministry of Information and painted by Kimon Evan "Kem" Marengo, the cards illustrate the story of Zahhak. Brave but "turbulent in his moods, and of an evil disposition," Zahhak falls under the sway of a demon and kills his father to gain the throne. Later, disguised as a cook, that same demon pays him homage, kissing his shoulders. Each immediately sprouts a snake.
Imitating Persian painting, Kem depicted this scene giving Zahhak the face of Adolf Hitler, the snakes the heads of Italy's Benito Mussolini and Japan's prime minister, Hideki Tōjō, and the demon-cook the likeness of Joseph Goebbels.
It gets better. In the "Shahnameh," Zahhak rules ferociously for 1,000 years, and in a prescient nightmare three warriors advance toward him, the youngest of which "smote him on the head with his ox-headed mace." In Kem's version, Winston Churchill (complete with cigar), Franklin Roosevelt and Joseph Stalin are the warriors. In another postcard, they escort the defeated Zahhak/Hitler, who is led away by a man wearing a blacksmith's apron: He is Kaveh, the icon of Iranian liberation. While it seems unlikely that Kem's propaganda worked, it certainly confirms the enduring role of the "Shahnameh" in politics.
-Ms. Lawrence writes about Asian and Islamic art for the Journal.

(From Local to Global)

A Collection of Ten Discourses
on the Iranian Subjects
&
An appendix,including fifteen pieces in verse